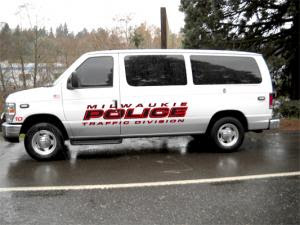 Yesterday, I returned to the scene – 47 mph in a 30 mph zone.  Why?  Don’t offenders always return to the scene of the crime?

Two days ago, I received a kind of formal looking letter from the Milwaukie, Oregon Police Department.  And, no, they were not asking for my assistance on a case.
The letter began:  “In an effort to improve traffic safety and community livability, the Milwaukie Police Department has implemented an automated speed enforcement program called photo radar to monitor vehicle speeds on streets and roadways within the city.”  They enclosed a grainy picture.  Yes, it was me.  I had a very serious look on my face, and both hands were on the steering-wheel.  In my defense, it looked like I was extremely intent on my driving.

The offense took place on McLoughlin Blvd., which was originally the old Highway 99E, two and three lanes each way.  So, it wasn’t like I was ripping through a residential area.  The fine was $160.  Wow!  The posted speed limit, going South on McLoughlin drops from 45 to 30 when you enter Milwaukie.  However, the highway in Milwaukie is not distinctively different from the highway north of or south of that city’s jurisdiction.  In other words, you’re driving along, minding your own business, and bingo you failed to note the 30 mph sign.  The Milwaukie Police photo surveillance van is waiting for you.

I’m kind of old fashioned about these issues.  This whole process is so impersonal, more focused on collecting revenue than enforcing safety.  The citation was not actually issued until five days after the alleged violation happened, and then the citation was a couple of days in the mail.  I suppose there were so many citations that it takes a while for the automated system to work.  In the ‘old days,’ the officer personally issued a ticket after listening patiently to a usually pathetic excuse from the driver.  At least there was some interaction with law enforcement, and everything was handled in a timely manner.  The officer usually commented that ‘you should have a nice day, and to please drive carefully.’  You felt reprimanded, but in a nice way.  At least I think so – depends on whether or not he had a smirk on his face when he said it.

I did sign a ‘no contest’ on the aforementioned citation and sent in my check.  How does one contest a traffic violation several days past, when he can’t remember what he had for breakfast that morning?  Surprisingly, I did have an agenda the day of the offense, and an appointment.  The time of the appointment and the appointment’s location would have made it practically impossible for me to be at the point cited in the ticket at the stated time.  However, the citation is carefully worded, indicating the time is ‘approximate.’  However, there is no indication that my speed at the time was approximate.  Apparently, time is a somewhat insignificant variable; but the radar is very precise about the exact speed.  OK.  I’m glad that photo radar has now achieved perfection, even though it is continuing to struggle with keeping time.

Coincidentally, there was a relevant article in the Oregonian yesterday:  ‘Well-Known Lawyer Takes Ticket to Court.’  Prominent Defense Attorney, Mark Cogan had his ticket thrown out.  He was cited at the exact same location where I was, but months back, for going 45 mph.  He went to trial and ultimately won.  On what basis might you ask?  Well, the prosecutor never asked the police officer in charge of the photo radar what the speed limit was when the violation occurred.  In other words, the prosecutor did not put forth the proper foundation for the violation.  He did not say that Cogan was driving 45 mph in a 30 mph zone.  A bit of a technicality I admit, but that is what attorneys do.  It doesn’t even sound like Mr. Cogan represented himself.  He apparently had another attorney handle it.  Obviously, Mr. Cogan has some philosophical differences with the photo radar system, because he spent far more money defending himself than the price of the ticket.

Well, under the circumstances, I could not afford to hire an attorney.  So, I considered representing myself.  I had some relevant points to make, including:  Why does it take almost a week from the time of the infraction to actually issue and mail the ticket?  When was the last time the photo radar system was calibrated?  What about the time indicated on the ticket?  But, I decided against that idea.  Thinking, perhaps, the magistrate would consider me something of a ‘smart-ass,’ wasting his or her time, and double my fine.

I will just conclude with a quote from the Oregonian article referred to above:  “That stretch of highway is a notorious speed trap.”  So, I guess we might say that Good-ole-boy, Alabama, population 250, has nothing over our very own Milwaukie.  Drivers, don’t say that we didn’t warn you.

Yes the sad thing about the Milwaukie speed trap especially at the north end, is that the radar van sits just feet beyond the 30mph sign giving in all logic zero chance to lower your speed to 30 from 45. The trap at the south end for the northbound traffic is similarly clever for revenue collection. Traffic comes rolling north on a downhill slope at a legal 40mph , changes quickly to 30 mph, sweeps past an open area at Kellogg Lake and the van sits at a blind spot behind RR overpass. They gotcha. Are they improving safety? All logic says no. Both radar spots have no pedestrians, no sidewalks, no residences. Its purely revenue collection, and unfortunately causes all of us to have a bad taste in our mouth for the city/government.

Milwaukie has made a big investment in its downtown area - one side is a newly developed Willamette River waterfront park and new bicycle/walking path, the other a weekend farmers market, coffee shops, library, antique shops, restaurants etc. Lots of car, bicycle, and foot traffic. The 30 mph zone extends for the entire length of the downtown area from overpass to overpass. If traffic isn't slowed at either end, much more it would continue to roar through at the 45 to 50mph it often travels on 99E.

Anonymous, apparently you approve of the described enforcement measures and that's fine. I, too, believe in good law enforcement. My comments were somewhat tongue-in-cheek; but, nonetheless, I stand by most of them. I did pay my fine in a timely manner. However, there is a very impersonal, anti-public perception connected to such delayed and questionable enforcement procedures. I guess that I am a little old school. Eventually, I suppose, we won't need a police officer at all. Why can't we simply computerize and use a robot to enforce such laws? It would be far cheaper and more efficient. But, thanks for your comment.

When paying my ticket here, I wrote that I would never spend another dime in Milwaukie.......and I haven't in 2 years. Businesses must hate the traveling public to enable and allow their city to continue this highway robbery. It's sounding like Ferguson's economic plan.

I received a ticket on the north end of Hwy 99 (heading south). The officer was hiding on his motorcycle in the bushes (outside of the city limits) like a coward. My take on a speed trap like this is to go to court, then appeal if necessary, then appeal again. Make 'em earn that money. If we all did this Milkwaukie would change their greedy ways in a hurry..