An Apology about my Previous Post / “President Obama, you are wrong!”

If you read my previous post (prior to my subsequent correction), you will have noted that I obviously confused Serbia with Syria.  I was attempting to state my personal, and I believe justifiable, opinion that Syrian Christian refugees should be given priority for admission to the United States.

I don’t, of course, have an editor to read my stuff.  I was tired and grand-kids were visiting.  Grandchildren have a way of disturbing one’s focus – as most grandparents could attest.  That said, I referred to Serbia rather than Syria.  I do know the difference.  And, I have corrected the error.

As an aside, Serbia’s population is approximately 90% Christian.  To my knowledge they are not being persecuted because of their faith – as is the case in Syria.

In addition to my apology for maligning the wrong country, someone close to me said that my comments about President Obama were unkind and just plain mean, and that I shouldn’t have said them.  Said someone might be right.  Barrack Obama is currently the President and deserving of due respect.  However...


Oh, and Happy Thanksgiving everyone!

President Obama, you are wrong! Syrian Christian refugees should be given first priority. 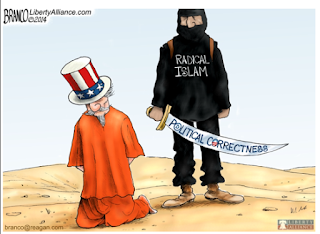 I disagree with the President.  We should give priority to Christians fleeing persecution in Syria. And I’ll tell you why.

I suppose that I should say, up front, that I am an Agnostic (with some spiritual tendencies I suppose).  Oh, I know, no one particularly cares; but it does give a certain frame of reference to my comments.

First, I’m convinced that Americans will face increased security risks with the importation of Syrian refuges.  Some say 10,000 Syrian refugees.  Some say 100,000 or more.  And, yes, there will be some radical Muslim extremists among them – no doubt about that.  ISIS will use the refugee situation as an opportunity to import terrorists (sleepers) who will strike when the opportunity presents itself.  Come on, think about it, why wouldn’t they?  Americans are generally pretty gullible, hobbled by their penchant for political correctness – and ISIS is well aware of that fact.  On the positive side for us, this situation will be far worse for the Europeans.

Why should Christians receive priority?  Well, we are basically a Judeo-Christian nation – and have been since our founding.  Moreover, United States Law gives priority to those refugees fleeing religious persecution.  Who has suffered the most, been murdered, tortured, raped and enslaved by ISIS solely due to their religious belief?  Yes, of course, the Christians.  Are not they the ones we should help first?  The President has said such ‘discrimination’ would be against everything that the United States stands for.  He is wrong.

Can Syrian Christians be positively verified as such?  I’m not sure, but I believe they (Syrian Christians) are fairly clannish and have been generally residing in certain areas of Syria.  Someone, probably a Syrian expert, could probably identify a Christian refugee – as opposed to a Muslim refugee.  Should this be an absolute qualifier for refugee status and admission to the U.S.?  No, some Muslims, principally parents with children, should also be considered for admission after appropriate vetting – a second priority.  Unaccompanied Muslim men between approximately 20 and 50 years of age should be the last priority for admission to the U.S.

I heard the comment bandied-about that 23 million Americans believe that President Barrack Obama is a Muslim.  I don’t know where they dug-up that statistic; but let’s just say that the statistic is true.  I don’t happen to believe the President is a Muslim.  On the other hand, I don’t happen to believe he is a Christian.  Being perceived as a Christian was just one more concession the President had to make in order to pursue his political ambitions.  No, my opinion is that when the President thinks about a higher-being, he simply looks in the mirror.

'Gun Control' / Why Discuss? / Nobody is Listening

After reading an article in the LA Times by Jonathan Zimmerman – well, it really caused me to pause and consider.

What so impressed me about Dr. Zimmerman’s (who is a professor at New York University) article?  It was interesting, about ‘gun control,’ and a little bit different take.  Dr. Zimmerman made the observation that whether you’re a gun advocate or a gun control proponent, we are generally wasting our time attempting to argue the finer points of the ‘gun control’ issue.  In other words, nobody is listening – certainly no one whose views are the opposite of yours.  He compared the ‘gun control’ issue with ‘Prohibition.’

“… a book by a University of California – San Diego sociologist named Joseph Gusfield convinced me that Prohibition wasn’t really aimed at ridding America of beer, wine and whiskey.  It was instead a ‘Symbolic Crusade’ by native-born Protestants, who seized on prohibition to affirm their historic dominance over immigrants and Roman Catholics.”

“… this controversy isn’t really about guns, any more than Prohibition was about drink.  It’s about different ways of seeing the world and – most of all – about who will gain the symbolic upper hand.”

“The question brings us back to Gusfield, who reminded us that politics are a battle for symbolic as well as material advantage.  Even if alcohol prohibition could never make America ‘dry,’ it made its adherents feel as if the country was still theirs.”

If this is true, and it may very well be true, there is no point for me to belabor the many issues and potential problems associated with gun control.  After all, no one, other than some in the choir, are listening to me anyway.

Nonetheless, I’d still like to make a couple of comments.  And, oh yes, I wanted to tell you why I left the NRA.

Why I left the NRA:  The NRA was running a quarter page advertisement for a ‘Street Sweeper,’ large capacity ammo-drum shotgun (depicted above) in their monthly magazine.  This gun has only one purpose, anti-personnel.  It cannot be used for hunting or any sporting events that I’m aware of.  It was extremely poor taste on the part of the NRA in that the ‘Street Sweeper’ would only appeal to someone who is, in my opinion, a few bricks short of a load.  Should it be banned?  I guess it could be said that it is no more deadly than a regular shotgun.  I just felt the ad was over-the-top offensive; and I couldn’t believe the NRA needed the advertising money that badly.  I just wasn’t sure that I could even be a fringe member of the organization – until, that is, the NRA starts exercising at least a modicum of discretion.