Interesting recent comment from Mark Zuckerberg (compassionate to a fault and incidentally a multi-billionaire), he stated:  “… add my voice in support of Muslims in our community and around the world as the leader of Facebook I want you to know that you are always welcome here.”

Of course, the rest of us know or should know, that the very gracious Mr. Zuckerberg and his family are continually surrounded by high-tech security systems and armed guards.  So, they don’t (of course) share all the same concerns as the majority of Americans regarding potential terrorist attacks.

Moreover, Facebook is a business requiring massive participation from people who have little else to do with their time.  And, there are billions of Muslims out there who are current or potential customers. Ka-Ching!

Zuckerberg has extended an invitation for them to come here.  With all his money, why doesn’t he go and live there?

Syed Rizwan Farook's father describes his son's beliefs. And no surprise there.

Have you ever noticed, that in almost every instance when there is a ‘terrorist attack,’ relatives and friends of the perpetrator invariably say something like:  ‘Gosh, I never noticed anything unusual about him.’  This, of course, is self-serving, even logical.  After all, no one wants to admit that the person they knew gave indications that he (or she in the most recent tragedy) was a danger to themselves and to others.  Who wants to be ridiculed by the news media, for not doing something to prevent the murder of innocent people?

So, it was interesting and highly unusual to read some of the statements by Syed Rizwan Farook (father of the San Bernardino terrorist of the same name, Syed Rizwan Farook).  The elder Farook was interviewed by an Italian reporter with the publication La Stampa.

As recent as last night, the President reiterated that Islam is a ‘religion of peace.’  OK, I guess it depends upon one’s own interpretation.  I’m not sure where the President got his interpretation of fundamentalist Islam; but maybe he is just telling us what he wants us to believe – you know, keep the lid on things until he can exit stage right (or left). 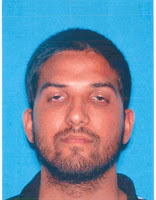 San Bernardino, California:  The mass murder by Islamic terrorists (Syed Farook and Tashfeen Malik) is on everyone’s minds.  It’s the hot topic of discussion around the proverbial watercooler.  In fact I had a lengthy discussion with friends this morning at coffee.  The San Bernardino situation, chaotic at first, is beginning to come into focus.  I’d just like to make a couple of comments.

Working in corporate security, after leaving the FBI, ‘workplace violence’ prevention was always a priority of my job.  The Fortune 100 Company that I worked for at the time sent me to the best schools and seminars on the subject.  Seminars that were presented by prominent psychiatrists and experienced law enforcement personnel.  I learned a lot.

When the first reports of the shooting in San Bernardino were released, it was immediately clear the incident was a terrorist act and not ‘workplace violence.’  If it had been workplace violence, it would have been an action entirely without precedent.  Law enforcement knew this.  The FBI knew this.  It kind of surprised me – no not really I guess – that initially the Obama administration and indirectly the Justice Department and the FBI (to a certain extent) parsed words – hoping, I imagine, that it was workplace violence; and not a terrorist attack.

The only other thing I would like to mention, at this time, is extending my sincere compliments to law enforcement for their competent and courageous handling of this tragic situation.  Very well done.  Something to tell your grandkids about.  You not only stopped these terrorists, but undoubtedly prevented some other equally devastating events planned by Farook and Malik.