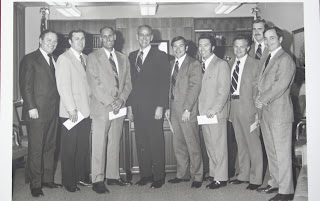 When I think back on the Patty Hearst investigation, I don’t remember any unusually dramatic experiences – that pertained to me directly.

Oh, I suppose I could bore you with endless stories about what it was like to be a FBI Agent working in Berkeley – in the early 70’s.  It was ‘surreal.’  And, yes, I understand that word is often overused, but that’s the way it was.  It was a crazy time.  Such as?  Well, like following Bill Walton around Berkeley.  You know Bill, the basketball player.  He was a shirt-tail radical at the time, and wanted to get involved some way in the Hearst matter.  I remember he was on crutches and was about seven feet tall – so he was pretty easy to follow.

Alice: But I don't want to go among mad people.
The Cat: Oh, you can't help that. We're all mad here.

You gradually become acclimated.  The abnormal and bizarre begin to become normal and routine.  For the most part, the Agents were hard-working and professional; but there were, of course, many exceptions.  There was some danger involved; and it went without saying the potential danger could extend to your family.  On many occasions, I got down on my knees to examine the undercarriage of my BuCar and even my personal automobile – looking for bombs.  There was a joke circulated about having your wife go out in the morning to start your car.  Not funny for most, I suppose; but Agents initially found it rather hilarious.

The days were long and exhausting, nerves got frayed.  Ultimately the Agents’ feelings toward Patty Hearst deteriorated – going from ‘I will risk my life to save her’ to something along the lines of ‘f--- her, I couldn’t care less.’  Most of us just wanted it to be over.

A couple other comments about the principal Agents mentioned in Jeffrey Toobin’s book, American Heiress:

Charles W. Bates, FBI Special Agent in Charge, San Francisco Division, during the Hearst investigation:  The Agents referred to him as Charlie.  I don’t know if he liked that name or not.  My experience, and I had a few contacts with him while in SF, was that he was formal, remote, often humorless and not particularly interested in the working Agents.  During the Hearst case, he spent a lot of time, much of it reportedly was social time, with the Hearst family.  Too much time, in my opinion – but they were, after all, the Hearsts.  Much of this time he should have spent with his Agents addressing leadership issues and morale.  There often seemed to be a leadership vacuum in the division.  Just my opinion.  Perhaps I am wrong.   I understand he had a long and distinguished career in the Bureau.  He passed-away at 79.

Picture above is several of us receiving an ‘incentive award’ for the capture of Cecil Robert Moody Jr., age 29, a former associate of SLA member, Donald DeFreeze.  Moody was wanted for armed robbery and murder.  Charlie Bates is in the center, dark suit, and terrific smile.  I am the tall dude, second from right.  I participated in the investigation leading up to the arrest; and was given the ‘honor’ of smashing down the apartment door with a 16 pound sledge hammer.  Moody was nude when captured, sleeping with two semi-naked women.  A loaded .357 magnum was under the bed, where he could quickly get to it.  Wisely, he made no move to do that.

Tom Padden, FBI Special Agent, San Francisco Division, directly involved in the capture of Patty Hearst:  I knew Tom casually.  He was an older Agent and assigned to the Bank Robbery, Fugitive Squad.  As I recall he was, at one time, with the Portland Police Bureau – and we discussed that we were both from Oregon.  Tom was one of the older Agents who chose to remain a ‘Street Agent,’ not interested in advancement.  He was highly regarded.  The fact that he was assigned or given the opportunity to arrest Patty was not circumstantial.  The arrest was, as I remember, a gift assignment largely based on information developed by other Agents.  However, I don’t begrudge him that assignment.  He was a good Agent.

Monte Hall, FBI Special Agent, San Francisco Division:  An older Agent, I knew him, but had very little contact with him.  He was on the same squad as Tom, and I believe Tom and Monte were close friends.  Monte might have been the squad supervisor – not sure about that.  Tom and Monte were major characters in Jeffrey Toobin’s book.  From what I read, it sounded like Monte may have been a little too cozy with the Hearst defense team – maybe not the most professional conduct, in my opinion.

As I’ve said before, on the inside, the whole Hearst / SLA investigation seemed often disorganized.  I suppose it’s easy to criticize, but that was the way it seemed to me.

For example:  To my knowledge, the FBI never set-up a professionally structured ‘hotline’ to receive tips from the public, as well as to offer a substantial reward.  The public did occasionally call in tips to various FBI offices, but those tips were sometimes ignored or haphazardly recorded.  I know of one instance where a caller telephoned the Resident Agency in the South San Francisco area; gave good information on the SLA’s possible location (which was later confirmed to be accurate), but the Resident Agent failed to write a memo reporting the caller’s information.  I guess he thought the tip didn’t sound credible.  Many of us thought the Agent should be fired, but he wasn’t.  I believe he received a letter of censure.

The ‘water – gas leads,’ when Agents were sent to every residence in the Bay area where new hook-ups for water, gas, electricity were ordered.  The operation became very public – ridiculously so – but might have caused the SLA to move south to Los Angeles.  Was that a good thing?  Doubtful.

I could go on, but what’s the point.  Anyway, I enjoyed reading American Heiress.  It brought back many memories.

Oh yes, in a previous post, I referred to ‘towers’ and that I would subsequently explain what they were.  This is what the Bureau called them and perhaps now calls fixed surveillance locations.  A tower could be an apartment, hotel room, or vacant building overlooking a location believed to be frequented by a suspect, person of interest or associate of same.  Towers could be operational for several hours or for many months – even years for those working foreign embassies.  It was boring, tedious work.  Towers were often used in organized crime cases and counter-espionage.  During the Hearst case, I spent one night in a teenage girl’s bedroom which overlooked the apartment of a possible associate of the SLA.  The girl, of course, slept downstairs on the living room sofa; but she made it clear that she was more than a little irritated by the FBI invading her private space.  I spent the night sitting on the floor and braced against her bed – drifting in and out of some sort of dream-like state.  It was miserable – and uneventful.  When I came down in the morning, the girl’s parents offered me coffee.  They were gracious.  The girl – eyed me suspiciously.  I apologized for the inconvenience.  Another Agent, later in the day, followed-up with a nice gift for the family.  This ‘tower’ turned out to be a one night deal – and was discontinued.