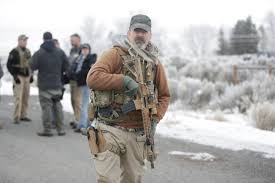 I’ve always had this tendency to bristle whenever someone, who has never been in law enforcement or worked in the judicial system, lays that old saw on me:  Justice isn’t always just.  But, of course, they’re right.  It’s sort of a bitter pill to swallow when you’ve dedicated a portion of your life to that profession.

Nonetheless, this brings me to the article by Maxine Bernstein in The Oregonian (March 12, 2017) –“Prosecutors Reflect on Refuge Takeover Trials.”  This article pertains to the second trial in the unlawful takeover of the Malheur National Wildlife Refuge in Harney County, Oregon by ‘armed occupiers.’

The ‘occupation,’ the ‘armed standoff,’ began in January of 2016; and ended with one of the ‘occupiers’ being shot and killed by Oregon State Police.  There was, as noted, an earlier trial of the principals, the leadership, in that stand-off.  All the defendants in the first trial (Ammon Bundy et al) were acquitted.

Williams said that the “decision to continue to pursue felony conspiracy charges against the lesser-known defendants, after last fall’s acquittal of occupation leader Ammon Bundy and six other key figures, was made between his office and Justice officials.”

And you might ask:  What’s the motivations behind that decision?  Well, there are a couple of possible explanations.

When Williams was additionally asked how he accepted the two significantly different trial verdicts, he responded that, “It takes two different juries evaluating the evidence and testimony and making different conclusions.  Sometimes, that’s how this system works.’’  No mention was made that the original defendants were ‘overly charged with complex crimes,’ which seemed to turn the trial into a nuanced exercise that the jury did not find understandable or compelling.

But, to many of us, the conclusion is that:  Justice is not always just.

The following from Ms. Bernstein’s article:

And so it goes…

PS:  For those who would like to read more blog posts on this subject concerning the early 'takeover' and shooting...

A very interesting development – explosive in a way – President Donald Trump has accused the Obama administration of placing a ‘wire-tap’ on the offices of candidate Donald Trump – weeks before the election.

In response, Barrack Obama has quickly and formally denied involvement in any such efforts – which could potentially be considered illegal.

But, don’t be too quick to dismiss this as a Trump fantasy.

It is conceivable that the Obama administration perceived or imagined Trump’s suspected involvement with the Russians was to undermine the election.  They (the Obama administration) directed a government agency to present their suspicions, via affidavit, to the FISA Court.  This is usually done by the FBI or the NSA – but could have been presented by the United States Attorney.  Permission could then have been granted by the court; and monitoring begun.

Furthermore, the wire-tap process would require the Court to advise, in writing, the ‘target’ ninety days after the program had been terminated.  The timing seems to fit.  This information could have been just now dropped in Trump’s lap.

If true, and we don’t know at this point, someone will almost certainly be 'thrown under the bus.'  Will it be FBI Director Comey or perhaps former Attorney General Loretta Lynch?

Obama will simply deny any knowledge and will have undoubtedly prepared a contingency plan.

FISA Court:  a U S court composed of a rotating panel of federal judges that sits in secrecy to review prosecutors' requests to wiretap telephones of suspected spies and terrorists and to conduct searches.