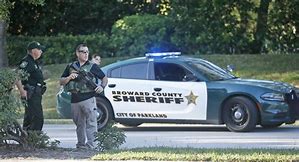 I have some comments regarding the shooting, February 14th, at the Marjory Stoneman Douglas High School in Parkland, Florida.

I've been thinking about the terms 'courage' and 'cowardice;' and Scot Peterson (School Resource Officer and a Broward County Deputy Sheriff) who reportedly failed to act in an effort to neutralize the killer Nikolas Cruz.

Deputy Peterson has been mercilessly criticized by innumerable people, including the President of the United States, for his (Peterson's) perceived cowardice in his delay and the failure to engage Cruz before the shooter could kill other students and faculty.

I can't specifically address Peterson's actions or lack there of. I don't know all the details. I'm aware there was a lot of confusion, lack of information, a break down in the command and control system, a fire alarm was blaring; and Peterson reportedly hesitated – uncertain what to do. There were, subsequently, 17 deaths and 17 non-fatal injuries. Some children and faculty might have been saved if Peterson had entered the building – and, at the very least, drawn the attention of Cruz.

I must say, that if I was the parent of a child killed or injured, I'm not sure that I could ever forgive Peterson. Whether or not that sentiment would be properly directed, I'm not certain. Many could / should share the blame including the FBI - and many others not prominently identified are potentially at fault.

But, this is about courage. I guess I object, perhaps am disheartened, that so many are quick to call Peterson a coward. Moreover, the loudest voices are usually those with the least credibility, those who have never been really tested. The most cringe-worthy individual, condemning Peterson as a “coward,” was President Trump – who, let's be honest here, has probably never done anything remotely courageous in his entire life – unless you are willing to include public speaking in your assessment. And, before you write me off as just another kook, one of those liberals searching for a way to criticize the President, I'm actually fairly conservative and agree with many of Trump's policies. However, as we know, President Trump isn't one to be particularly circumspect about his comments, even when those comments might be needlessly hurtful.

A rhetorical question: Would those who have been personally involved in the most dangerous imaginable combat or arrest situations criticize a fellow participant or comrade if they hesitated or froze at a critical moment? Perhaps, in a constructive way. But, would they call him a 'coward?' I don't think so. All of us have a point where we will break – doesn't matter who you are. Those who have true, even what is perceived to be unlimited, courage in the face of death understand this better than anyone.

I understand that Peterson had been 'trained' in what to do during a school shooting. Yes, I suppose. How good that training was, in view of what occurred, well... it's doubtful.

My son is in law enforcement and has received recent training in school shooting scenarios. From my perspective, the training has been simplified and rightfully so. Advance orders have been given.

'The orders are go, go, go! Don't worry about a perimeter, backup, coordinating with headquarters, etc. Even if you are on your own, you enter and attempt to engage the shooter.  Good luck and God bless.  Those are your orders.'