Now that I have offended much of the French populace, I might add that they shouldn’t really concern themselves with my personal opinion because many Americans wish we were just like the French.  And, quite a few of our political leaders are moving us, gradually you understand, in that direction.  Soon we too will have mercenaries fighting our battles.  It’s really cheaper in the long run and many Americans can’t be bothered with the mundaneness of self-reliance and self-protection – certainly not any dangerous military service.

Oh, what about the U.S. Second Amendment to the Constitution?  No problem there.  Our Supreme Court can just fine tune it a little, reinterpret what it means; and, that’s that, it can be placed on a dusty book shelf.

Let’s see… My Second Theory regarding the courageous actions of Stone, Skarlatos and Sadler:  Well, it has to do with their familiarity with guns.

Guns are after all inanimate, mechanical objects or basically tools.  My contention is that the more you know about a tool, even a dangerous tool, the more comfortable you become using it – being around it.

Example:  You are in a public place, suddenly accosted by an obviously distraught, possibly deranged person waving a chainsaw around and endangering people, even children.  The chainsaw is loud and scary.  What type of individual, excepting an armed police officer, would be the most likely to intervene and attempt to neutralize this dangerous person?  I would think it would be someone who was familiar with chainsaws, perhaps even utilized a chainsaw on a daily basis.  Why?  Because that individual understands that chainsaws can be dangerous, but that they do have limitations.  He would look for that brief moment of weakness, either on the part of the person operating the chainsaw or the chainsaw itself.  He would not, in other words, be frozen in a state of inaction; or feel his only option is to run.

What does that have to do with the incident on the train?  Perhaps that particular incident, and their particular reaction, had something to do with Skarlatos, Stone and Sadler’s familiarity with guns.  Both Skarlatos and Stone were known to have some military training.  But I would also venture that Skarlatos, Stone and Sadler had some previous experience with guns as hunters, target shooters, etc.

I’ve been around people who were frightened to even touch a gun, for fear they would inadvertently do something in handling a gun that would cause it to harm them or someone else – as if the gun was alive and had a mind of its own – much like one might treat a poisonous snake.

Perhaps I’m wrong about the three Americans.  I suppose we’d have to ask them.  I’d like to know how experienced Stone, Skarlatos and Sadler are with guns.  Do they own guns?  Did they grow up with guns?

I did and many of my friends did.  Would any of us have the courage to confront a terrorist?  I don’t know.

I’ve had considerable training and experience with weapons (guns), particularly in the FBI.  One thing that I believe I would quickly recognize is how proficient is this person with his weapon, as well as what are the limitations of this particular weapon.  Those observations would be my deciding factors as to how best to react. 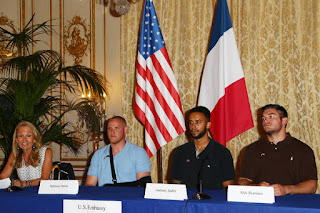 What motivated Spencer Stone, Alek Skarlatos and Anthony Sadler to take action as they did in the French train incident?  Why them?  OK, and this “American thing” the ‘thing’ the British Colonel referred to, is there something to that?
I’m not certain of course, but I’ll take a stab at it.  Actually, I have two theories.  These are just my opinions.  No offense is intended.  One of my theories is about France the country and the current cultural, sociological traits of their citizens.  A subject of which I admittedly know little, other than generalized observations.  The other is about guns.  A subject about which I know quite a bit.
First Theory:  In contrast to the United States, France has evolved, since World War II, into a pacifist country with an emasculated military; and that same description could be applied to their general population – depending upon other countries to do the heavy lifting in world affairs.  France sometimes talks a good game, but militarily they are a non-entity.  And, without doubt, their citizenry reflects that characteristic.  France is what in global affairs would be considered a 'soft target.’  Is ISIS aware of that?  Of course.  Yes, I recognize that it is not inconceivable that a French citizen could have rushed Ayoub El-Khazzani, but that French person would be, in my opinion, an anomaly.
Regarding Iraq and Afghanistan and the conflicts there, France was considered a U.S. ally; but in name only - an ally in the sense that if you are about to be in a fight, France would be happy to hold your coat.
In support of the French militarily some may cite the First Indochina War (1946–1954) where France fought a war in which they sustained casualties in the tens of thousands – a monumental sacrifice in an, unfortunately, losing cause.  However, most are not aware that the vast majority of those casualties were from France’s colonies and were largely made up of Moroccan, Algerian, Tunisian, Laotian, Cambodian, and Vietnamese forces.  Metropolitan or actual French soldiers were generally excused and/or prohibited from combat due to the lack of public support for the war.  Yes, there were some French professional soldiers in the conflict, but they were by far in the minority.

Now, what about guns?  My second theory:

Alek Skarlatos, Spencer Stone & Anthony Sadler / You Make Us Proud to be Americans 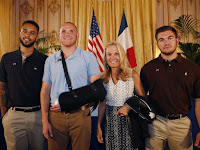 “Europe's media is still abuzz with the extraordinary story of three Americans who tackled a suspected terrorist on Friday on a train in Northern France. The question being asked is this: Were they displaying a distinctly American can-do spirit?” (Bloomberg View)

True’s comment:  Well, maybe.  But, “can-do spirit” “distinctly American;” what does that mean?

All of us proud Americans have heard the back-story.  Sunday, French President Francis Hollade awarded the Legion of Honor to three, young American men (Alek Skarlatos, Spencer Stone, and Anthony Sadler) for subduing a 26-year-old Moroccan, would-be terrorist, who was apparently intent on killing an untold number of passengers on a French commuter train.

Skarlatos and Stone are members of the American military; and Sadler is a friend of theirs and a college student.  The award they received from the French government and any subsequent adulation is, in my opinion, justly deserved.  These three are remarkable young men - saving countless lives.

The would-be terrorist, Ayoub El-Khazzani, claimed that he had earlier found the AK-47 and other weapons in a French park and simply wanted to rob the train’s passengers.  This explanation / alibi is so incredibly unlikely that it is kind of funny.  Hopefully, the French authorities will sit on him until he squeaks.  Some others are involved – almost certainly.

Of interest (food for thought - at least for me) was a comment, by a former British Army colonel, writing in the United Kingdom's Daily Telegraph, who declared: "It's an American thing. I salute it."  He was referring, I imagine, to the courage displayed by these young men.  And, there is no denying that a great deal of courage was involved.

Nonetheless, it caused me to wonder why it was principally Americans, and not French citizens, that reacted first and most decisively.  Perhaps, it was simply chance.  But, there must have been many French passengers in the immediate area.

I don’t believe that Americans are necessarily more courageous than the French.  Culturally speaking, I suppose some cultures are more aggressive and impulsive.  That said, the American culture is about as diverse as any in the world.  So, “It’s an American thing, I salute it” doesn’t seem to make a whole lot of sense.  What is it about this “American thing?”

I’ve got a theory.

It’s not that I don’t have things that I think about.  Like what, you might inquire?  Well…

Donald Trump and Hillary Clinton leading in the poles of their respective political parties – God help us.

Ferguson, Missouri:  What more can be said?  Hopeless.

Nuclear treaty with the Iranians (whoops not a treaty), agreement, I guess.  Does anyone believe the Iranians will honor the agreement?  Are we that stupid?  Well, not us – just the people who represent us.

National debt in excess of 18 trillion, getting bigger all the time.  Who will pay this back?  Our children and grandchildren.  Moreover, what fools are actually loaning the United States money to squander on all the things this country really doesn’t need.

Cecil the Lion.  I don’t know why anyone would want to be a ‘trophy’ hunter.  Is this due to perceived sexual inadequacy?  Well, heck, that same motivation is undoubtedly in play with many of our politicians and CEOs (Hillary Clinton and Donald Trump).

No, that was not Joe Buck’s problem.  "I am one helluva stud."

What else?  Let’s see.  I was sitting on the patio last evening.  It was nearing eight o’clock.  The honey bees were still working among some purple flowers.  I was wondering when they were allowed to go home.  Where is home?  How far is it?  And what do they do when they get there.  More importantly, are our concerns more important than the honey bee?  Doubtful.  His (or I should say more precisely her) life is fairly basic.  You work, you eat, you socialize and you die.  Are we so different?

Shakespeare, the genius; his plays have lost some relevance over the years (1564 to 1616).  Did you know that he was reportedly 6’4” (although disputable)?  He must have been one tall dude, and what was he fed as a child?  The average male was approximately 5'5".

Watching a Shakespeare play is kind of like watching paint dry, but noisier.  Sorry, just my opinion.  There is, nonetheless, a certain snob appeal.  Yes, I’ve actually seen a couple of his plays.  He is, however, eternally quotable.  One of my favorites – the only quote of his that I bothered to memorize.  On the meaning of life:

Life's but a walking shadow, a poor player
That struts and frets his hour upon the stage
And then is heard no more: it is a tale
Told by an idiot, full of sound and fury,
Signifying nothing.       Macbeth