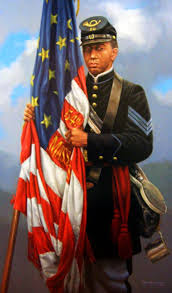 I’m very disappointed that professional and other athletes feel they can and will make a ‘political statement’ by dishonoring the flag; and choosing to ‘take a knee’ during the playing of the National Anthem and the raising of the American flag.

I was wondering if any of these athletes, many of whom are African Americans, have ever read anything about the Civil War – the war to preserve the Union and to free the slaves.  If so, did they happen to note and perhaps think about the Union flag bearers, often unarmed, who were given the ‘great honor’ of carrying the American flag during an attack, knowing they would face almost certain death?

The flag bearers at the front of the assault were a principal target for the Confederate soldiers.  When one of the Union flag bearers was mortally wounded another soldier would grab the flag before it hit the ground, carry it high until he too was shot; and then another and another.

Moreover, regiments, made up mostly of African Americans and former slaves, played a significant role in the defeat of the Confederate Army.  They too charged into a rain of enemy fire proudly carrying the American flag.

What would they think of us now?