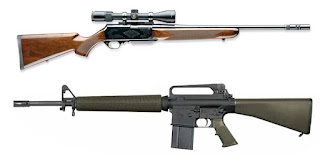 Relevant to some recent school shootings, my topic for this posting is ‘Assault Weapons.’

This is a subject that drives gun owners right up the wall.  Why? Because ‘assault weapons’ have become such an over-worked cliché generally bandied-about by those, including politicians proposing laws, who cannot define what they are actually talking about.

To describe 'assault weapons' simply as ‘military type’ guns only exposes the lack of knowledge of the speaker.  All guns have a military genesis – all guns.  Guns were initially invented and developed to kill people in war; and it was only later that they were used for hunting and sport.  And, one could say the same about any number of common devices in use today, as well as some domestic animals; all of which were first and principally developed and promoted for the purpose of human conflict.

Generally speaking, I hope we all understand that many guns are already banned or not available to the American public.  Some of these can be obtained or displayed under very restrictive conditions and licensing standards.  All automatic weapons are banned.  What does that mean?  Well, an automatic weapon is generally a rifle type weapon (could be a pistol) that fires more than one round (a burst) ‘automatically’ when you pull the trigger.  In other words a ‘machine gun.’

Some in the public are familiar with the Thompson Sub-Machine Gun from movies of the ‘gangster era,’ (Pretty Boy Floyd, John Dillinger, and Baby Face Nelson.)*    In this context, it is sufficient to know that ‘machine guns’ (automatic weapons), of all varieties, have been banned for many decades – as they should be.  In more recent times, for reference purposes, the military version M-16 is an ‘automatic.’  That, too, is generally banned – not sold, and not legal to possess.

What is legal?  Well, ‘semi-automatic’ rifles, pistols and shotguns are legal to possess.  What does that mean?  ‘Semi-automatic’ is one trigger pull, one round fires (self-loading).  Some might immediately respond, ‘So what, it will fire as fast as you can pull the trigger.’  Yes, you are right in that regard.  However, the point is that semi-automatic weapons have been around for approximately 150 years and have been commonly used for hunting and sport most of that time.

The military’s M-16 (fully automatic) has a civilian counterpart called the AR-15 (semi-automatic rifle).  They look the same, but they are not.  Many hunters like the AR-15 for various reasons – principally for its durability.  On the other hand, most hunters would prefer other semi-automatic rifles and/or shotguns for their craftsmanship, quality, and performance.

So, what is the difference between the present-day, civilian-owned, so-called ‘assault weapon’ and other semi-automatic rifles, shotguns and pistols?  Functionally, there is no difference.  It is all about cosmetics.  All have the same ‘killing’ potential in the hands of a mentally deranged shooter.

What then is the argument against civilian owned ‘assault weapons?’  Well, basically, there is no valid argument.  Unless, you are talking about an illegal bootleg, modified, or stolen military weapon.

If you are a gun control advocate, and a gun owner should ask you why you hold a position against guns, in an attempt to engage you in civil discourse, be prepared to answer coherently.  Please don’t automatically use the vague, meaningless statement, ‘We should ban all 'assault weapons’ or, even worse, in my opinion, ‘We should ban all guns.’  If this is the sum of your incoherent comment, you will only have accomplished exposing your lack of understanding of the issues, or dare I say your ignorance.

Magazine capacity for semi-automatics is another issue.  And here, in my opinion, gun control advocates have a valid argument.  We’ll talk more about this.

Addendum:  Above Photo:  Top is a common semi-auto hunting rifle.  Bottom is the semi-auto AR-15.

* Baby Face Nelson is no relation, I’m happy to say, – his actual name was Lester Joseph Gillis; and he was responsible for the murder of three FBI Agents.  Gillis was later killed by FBI Agents in a shootout.  If you had lived in that period, and happened to meet Gillis, you would have required a ‘death wish’ to address him as Baby Face.  He did not like that nickname.  It was given him, reportedly, because of his small stature and child-like face.  The Nelson part was due to an alias he once used.
Posted by True Nelson at 10/29/2015 08:02:00 PM