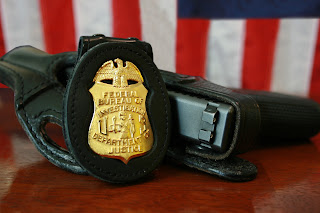 This was kind of an interesting trial here in Portland. The US Attorney seems to have put his foot in the bucket one more time. First it was the blanket acquittal of the Bundy Clan who occupied the Malheur National Wildlife Refuge – which, of course, ended with the law enforcement shooting death of Robert LaVoy Finicum. It was, undoubtedly, a painful defeat for the U.S. Attorney's Office; and now Agent Astarita walks.

In this most recent trial, Special Agent Joseph Astarita (member of the FBI's elite Hostage Rescue Team) was accused of firing two shots at Finicum's car – one hit the roof of the car, one missed completely – as Finicum's vehicle barrelled toward the police roadblock.

However, Astarita has steadfastly denied firing the two rounds. Some said he did. Others said he didn't. Astarita was tried for 'Making a False Statement' and 'Obstruction of Justice.' The jury decided that Astarita's guilt could not be proven beyond a reasonable doubt. Therefore, the actual shooter of the mystery bullets officially remains undetermined.

I happen to agree, based on what I've read, with the jury's verdict. Am I absolutely certain that Astarita is innocent? Well, I wouldn't go that far.

As a former FBI Agent, I'm asked (and I hate to use the phrase made famous by Hillary Clinton – but here it is) 'what difference does it make?' Neither of the mystery bullets injured anyone, so what's the big deal?

Well, this issue isn't over. Not by a long shot (no pun intended). A 'wrongful death' civil trial is pending. If in said civil trial, the attorney representing the Finicum family could emphatically and aggressively state that FBI Agent Astarita inflamed the situation by firing first, they would be able to make a credible charge of 'contributory liability' on the part of the FBI.

As you might imagine, the FBI would like to avoid this. Finicum was shot and killed by an Oregon State Police Officer. The shooting has been ruled 'justifiable.' However, that ruling only goes so far. Therefore, the FBI would like very much to have a seat on the periphery of any potential civil trial and avoid any significant monetary damages awarded by a jury (not to mention public loss of reputation and credibility). On the other hand, attorneys representing the Finicum family will want to involve the FBI; and to include their substantial 'deep pockets' in any settlement. That said, it is extremely likely that after exhaustive negotiations, this matter will not go to court. The FBI and others will 'pony up' and the matter will be quietly closed.

Why did the local United States Attorney and the Federal Bureau of Investigation agree to the prosecution of Astarita? Both agencies undoubtedly were aware that the case was weak. And as stated above, no person was harmed by the mystery bullets. Were local Feds pressured to proceed by the United States Attorney in D.C.? We'll never know the answers to these questions.

Unfortunately, if Astarita is in fact innocent, I fear his career in the Bureau is over – one way or another. Why? Because both the FBI and the U.S. Attorney firmly believed he was 'not innocent.' That feeling will not go away anytime soon – or ever.

Post Script:  I've written several posts relevant to Astarita and the Malheur National Wildlife Refuge Take Over, as well as the Bundys.  You can find these posts by placing said names in the 'search box' on my blog's main page.

The following is one quick reference you might find of interest for background information:  https://goo.gl/bKhKt9